For the past thirty plus years, I have been involved in operations and training soldiers, focusing on individual, collective training, readiness reporting and analyzing the way soldiers succeed or fail, then provide analcites on ways to improve or sustain.   From June 2005 through July of 2006 I served as the RCAG North Commander of an Embedded Training Team to the 209th Afghan CORPS.  Last duty assignment was Commander 117th Regional Training Institute where the focus is on individual training. Last Artillery assignment was Commander 196th Field Artillery Brigade from May 2004 through July 2007.  I was dual assigned as the J5/7 for Tennessee.  I was task to develop Tactics, Techniques and Procedures (TTPs) for soldiers and airmen to support state and local governments preparing for military support to civilian authorities during a natural or terrorist disaster.  I have worked as an Analyst for artillery units in preparation for deployments. I have a Secret clearance (down graded from TS because of time and retirement).
PROFESSIONAL EXPERENCE

May 2014 - June 2014.  Performed duties as an Analyst for Engility Corporation in Hohenfels, GE.
Responsibilities were to work in the simulation center as an analyst for the A Battery 1-82 Field Artillery, exercise and assist the Observer Controller’s writing the After Action Review.

February 2013 - March 2013.  Performed duties as an Analyst for Engility Corporation in Hohenfels, GE.
Responsibilities were to work in the simulation center as an analyst for the 2D Cavalry Regiment exercise and assist the Observer Controller’s writing the After Action Review in preparation for their deployment.

August 2006 - August 2007.  J5/7 (strategic planner and exercise coordinator) for the Tennessee National Guard (TNG)
The duties are to coordinate with Civilian authorities and develop Tactics, Techniques and Procedures (TTPs) that will support the Governor and local authorities during disasters natural or man made.

April 2005 - July 2006.  Deployed as the Commander of the196th FA BDE to Afghanistan to serve as the Regional Command Assistance Group - North an Embedded Training Team to Mentor and train the Afghan National Army's 209th CORPS.  We worked for Task Force Phoenix and  CSTC - A.


2001 – 2004.  Training Administrator for the Tennessee Army National Guard (TNARNG)
I was responsible for Individual Training, Collective Training, Exercises coordination with Active and Reserve units. I coordinated with exercise contractors for simulations.  I was also tasked with ensuring resources were provided to support the above mentioned responsibilities.  I was responsible for overseeing 72 plus million dollars used to pay, train or resource the Tennessee Army National Guard.  I coordinated with the five Major Commands within Tennessee for the development of   the quarterly (near term), one year (short range), and five year (long range) calendar’s as required by FM 7-0 and FM 7-1.

1994 – 1997.  Training Officer for the TNARNG
Responsible for collective training, readiness reporting for five major commands and coordinating with Active and Reserve training facilities for dates and training areas at their facilities.  Coordination with NGB for funding needs.  I coordinated training and travel for 278th ACR deployment and redeployment from the NTC.

1987 – 1994.  I served in several positions within the Brigade where my full time responsibilities were operations, training and budget.  I was deployed to Iraq from November 1990 through May 1991. 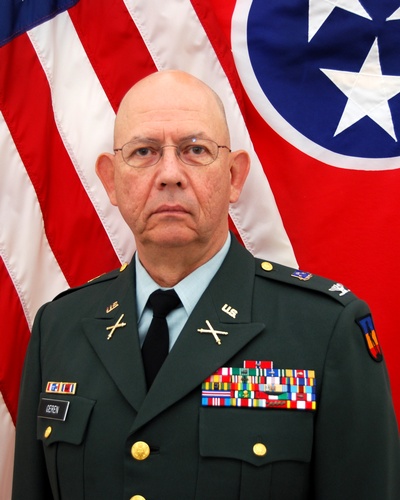